When I began playing pickleball, the first thing I, like everyone who plays, did was buy a paddle. I tried a few that other players had but none felt comfortable in my hands.

I went to the largest paddle vendors to get information and they had an abundance of information. Unfortunately, most of it was confusing and much of it was contradictory. I wasn’t getting much help. Even players who had played for years including 4.5 and 5.0 players didn’t really understand why they chose one paddle over another. So I finally bought the paddle that seemed the best fit for me. Until it really wasn’t. Then I bought another and it was an improvement over my first choice but wasn’t quite right either. Then I bought another, and a fourth and a fifth until I put my foot down and said there must be a better way. 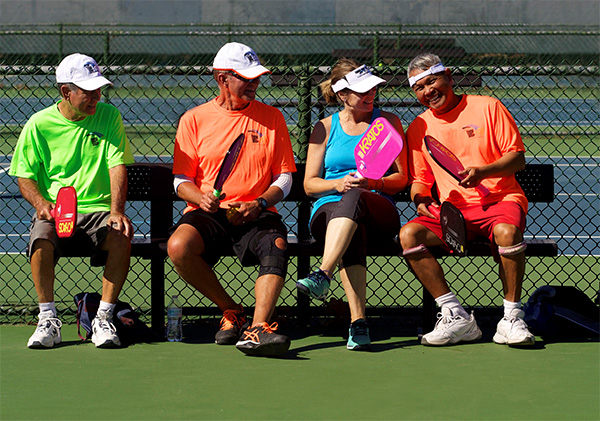 The first thing we need to understand is what kind of player are we. We can’t find a paddle until we know our own game and what kind of style of play we are most successful at. There are many players who are constantly improving and seek to get better and better as they enjoy the game more and more. Having confidence in your equipment is the key step to increased performance. Using a paddle that fits their hand, fits their style of play and will enable them to improve to achieve the goals they have for themselves in the sport.

I have been making the finest custom wood baseball and softball bats since 1999. My company has over 300 Major League hitters who stake their livelihoods on our bats. When players are confident they have the bat that suits their game, they go to bat with confidence. That confidence translates into better performance. A baseball or softball bat is a very difficult product to purchase without holding it and getting the feel of it in your hands. I have learned over the course of fitting thousands of players how to help players find the tool that will help them achieve their goals- from youth baseball to the Major Leagues to league champs in their local softball league. My company, X Bats, is STILL the only bat manufacturer to supply the same quality wood to each and every customer from the t-baller to the senior league weekend warrior that we supply to our 300+ Major Leaguers.

Now pickleball has become my passion. I play for 4 hours a day, 4 days every week and look forward to each day. The game has helped me slowly wind the clock backwards and motivate me to be more active, eat better, focus on healthy habits and more. As one of my friends said to me, “Pickleball saved my life”. You know what I mean because if you are reading this then you’re hooked on the game, too.

It’s time to use my experience as an athlete and as someone who provides tools to help athletes become the best they can be, to help players like you find the paddle that will help you be a better player- the best you can be.

On behalf of everyone at Third Shot Drop, we look forward to serving you and helping you build the paddle that helps take you to the next level whether you are a 5.0 Tournament player or a player who looks forward to getting on the court and having fun turning back your clock.

About our logo and company name

Throughout human history, the number 3 has always had a unique significance.

The ancient Greek philosopher, Pythagoras, postulated that the meaning behind numbers was deeply significant. In their eyes the number 3 was considered as the perfect number, the number of harmony, wisdom and understanding. It was also the number of time – past, present, future; birth, life, death; beginning, middle, end – it was the number of the divine.

Three is the first number to which the meaning “all” was given. It is The Triad, being the number of the whole as it contains the beginning, a middle and an end. The power of three is universal and is the tripartite nature of the world as heaven, earth, and waters. It is human as body, soul and spirit.

In the first three numbers, all of the others are synthesized. From the union of oneness and duality (which is its reflection), that is, from triad, proceed all of the other numbers, and from this primordial triangle all figures derive.

This threeness or triad, has always been considered sacred–like oneness, duality, and all numbers–by virtue of its very properties and particular attributes. These properties and attributes are manifested in its threefold nature, which of itself is the inevitable expression of a principle, an archetypal fact, that solidifies in a series, as a representation of ideas and energies that materialize in magical, mysterious fashion while obeying precise, universal laws, which the numerical codes and their geometrical correspondences symbolize.

Number 3 is the number of good fortune.

The Pythagoreans taught that the number three was the first true number.

Three is the first number that forms a geometrical figure – the triangle.

Three was considered the number of harmony, wisdom and understanding.

Three is the number of time:

Three is the number of the divine.

From ancient times to present day, pyramids have been used to amplify and transform energies. Considered one of the strongest talismans on Earth, pyramids existed in numerous ancient cultures. They served as symbols of spiritual power, eternal life and cosmic energy.

Spiritually, the pyramid is also highly symbolic. The base represents the physical body, the sides the journey of life and the point symbolizes union with one’s higher power. The depth of symbolism and mystery surrounding pyramids makes them amazing tools. They are thought to promote healing, prolong life and to positive charge items within their walls.

So what does this have to do with pickleball?

The most important shot in pickleball is the third shot. This shot sets up the point and seeks to equalize the serving team with the receiving team for positioning at the NVZ.

As many of you will attest- pickleball has become more than just a game- it represents a community, a culture and a camaraderie amongst players of all ages, genders and skill levels.

We at Third Shot Drop embrace the game, it’s benefits and most of all the players who are passionate about the game and the great friendships that have resulted from our participation.