Why what your paddle is made of matters 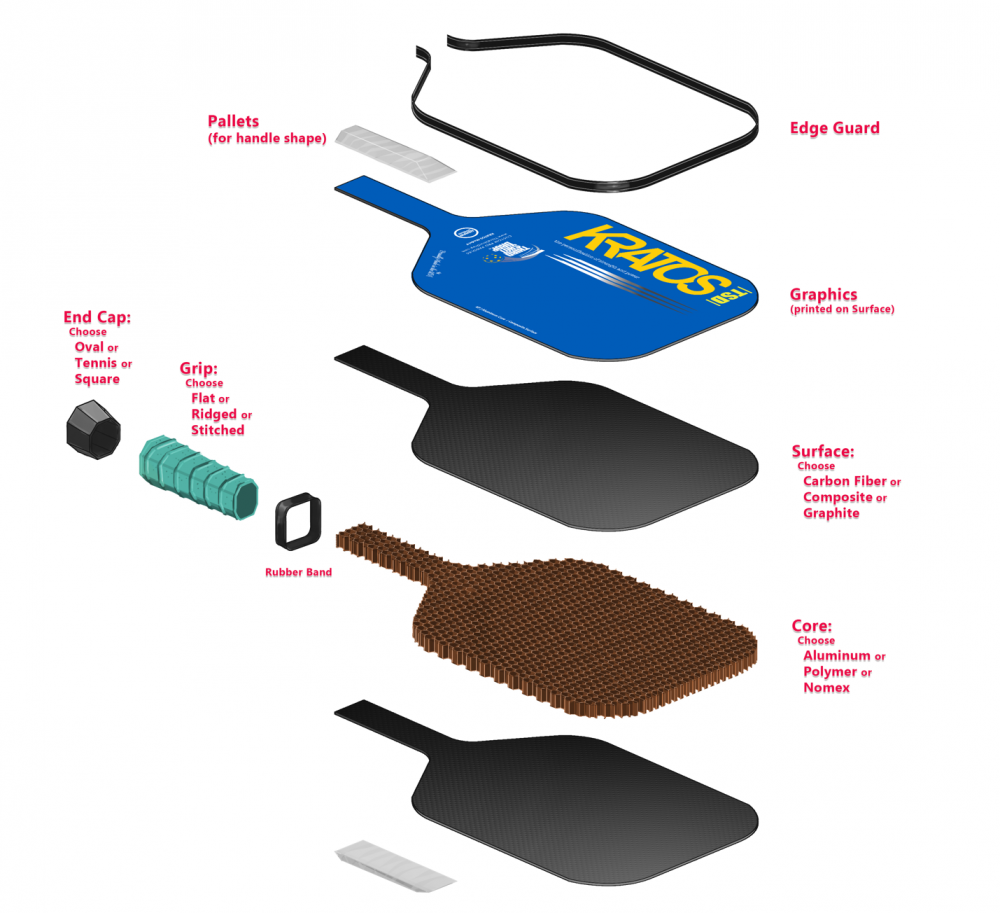 Many players (including pros) don’t understand what’s in a paddle so they don’t really know that a core or surface really is and WHY it makes a difference to THEM. It’s not about the type of core or type of surface- it’s about the notion that there are different materials that affect the way their paddle performs and we are the ONLY company that offers this to every player.

We hear players say they use a graphite paddle or they want the honeycomb paddle. Without understanding the basic paddle construction, talking about cores and surfaces are premature. A pickleball paddle consists of a honeycomb (its core- meaning it’s the middle layer of the paddle) which is sandwiched between two faces (the surface of your paddle on each side). This core sandwiched between the surfaces is called a panel. The surfaces are bonded to the core on both sides with a very strong adhesive. Then the entire paddle shape including the handle is cut out of the large 8’ x 10’ panel, including the handle. Next the graphics are printed on each side of the paddle surfaces. The edge guard is then attached to the perimeter of the paddle to protect the edges. Finally, the handle is built on top of the handle end of the panel. It consists of two pallets (these are what gives the handle it’s shape) and an end cap is placed over the end and the bottom of the pallets (see drawings). Now the grip is sized or each person’s hand by building up the handle in 1/8” increments. The grip tape is wound around the handle (and yes, the way it is wrapped matters if you are left handed or right handed) and a band is placed at the top of the grip to keep it in place and giving it a finished end so it doesn’t unravel.

Now that you see how the materials come together, understanding what these materials do and how they make each paddle perform is what should matter to every player.

Finding the right paddle for you isn’t about what Bob or Sally plays with or which colors look best. It’s about building the right tool for the job. Players that understand their game and are educated in the playing characteristics of the materials that make their paddle and cause it to play a certain way, are better equipped to perform to the best of their abilities. Knowing about cores, surfaces, weights and handles/grips will enable you to build the paddle that will elevate your game. When you have confidence in your equipment, that translates into performance on the court!

Which Core and Why

Currently, we offer three different types of cores: Aluminum, Nomex and Polymer. Each one has playing characteristics that suit certain styles of play.

Aluminum core paddles feature advanced, lighter weight, aluminum honeycomb cores. Aluminum cores are known for their outstanding “TOUCH”. The ball comes off just a bit slower, which gives players an extra edge of maneuverability and control. This extra amount of control is due to both the soft rebound and the lightweight nature of aluminum. Players may prefer this core for their third shot drops and touch shots. However, aluminum cores do dent over time (more so with the “rubbery balls”), so are not recommended for super hard hitters. You will lose a bit of power with aluminum cores.

Polymer core paddles are the most popular core currently used in pickleball paddles. The honeycomb polymer core provides power performance, yet gives soft control for the touch shots. Polymer cores have earned the reputation of being the quietest core on the market due to being slightly less deflective than the other two cores. The reduced deflection offers players a split-second longer to manipulate the ball, hence offering control.

Nomex core paddles feature a lightweight Nomex honeycomb core that has been used in a variety of sporting and high-tech industry applications. Nomex was the first core used in pickleball paddles and is still is a popular core material. Nomex honeycomb begins as a cardboard-like material which is then dipped in resin creating an extremely damage-resistant material. They are also the loudest of the three cores. Nomex cores are well-liked for their durability and consistency. Players looking for a lot of “POWER” prefer Nomex cores. You may lose a bit of pace control due to how quickly balls come (pop) off the Nomex core.
Add New
Comments